Finally. Home.  (For a day at least.)  I’m not ashamed to admit that some of the tubs and coolers from camping were still hanging out in the kitchen at the start of this day.  The best part of today was recovering the kitchen and dining room.  I’m thankful for a husband that still cheers me on when I send him these kinds of pictures while he’s at work.

So that home thing didn’t last long.  I headed to Richmond again for a meeting of the Virginia Council of Teachers of Mathematics board.  This was my first official meeting as one of two elementary representatives.  These kinds of situations stir up a bit of my impostor syndrome.  However, I was pleasantly surprised that the folks there were super kind, and I actually had decent ideas to add to the conversation and brainstorming.  As I had promised myself the week before, I ended the day with a ride at Pocahontas State Park on the most perfect trails.  While I was riding, my mom texted and asked if I wanted to catch up with her for dinner before heading back.  We enjoyed dinner at Chuy’s while chatting about her upcoming surgery and how her friends remind me of the movie Wine Country.

This week Chica has been attending a middle school orientation of sorts.  The bus picks her up at the top of our street, and she spends the morning there having breakfast, going to a few “classes” and eating lunch before she gets dropped off back at home.  While Bubba has certainly missed her company during the day, I think it’s overall been a great experience for her.  She’s talked about making a new friend, taking a tour, visiting the herpetology lab, and decorating a pot in art.  I’m thankful for the teachers who gave up part of their summer to make sure incoming 6th graders feel prepared.  Now we just need to figure out how to help moms and dads feel prepared too.

Today was a first for our podcast!  We welcomed a remote guest, Alice Aspinall, who talked about her book, Everyone Can Learn Math.  She wasn’t afraid of our 6AM start time, and we joked about how thankful we are that a podcast is just audio and not video!

Since Chica was having something special each day at school, I felt like I should do the same for Bubba.  We chose a morning bike ride on the trail and did almost 7 miles together.  When I go on short adventures like this with him, I can’t help but wonder what’s to come.  When he gets bigger and stronger, will he still want to go with me?  I would love hike the entire VA section of the AT one summer.  As of right now, it’s looking like he’s the only family member that might find that fun.  We’ll see.

This spring, Alissa reached out to three of us who have girls the same age about planning a weekend getaway together.  Other people who heard about it assumed we were going to have “the talk,” but I think we’ve all already given it in one way or another.  Really we just wanted to get together to chat, eat, run, swim, hike, and let our big kids have fun hanging out.  We ended up in a little Airbnb on the Shenandoah River with way too much food for just one weekend.

All the moms:  We’re going anyway.  Get your shoes on.

Despite their whining, we hiked the Hightop Peak Trail, a 3 mile out-and-back on the AT that you get to from the Shenandoah National Park.  The view at the top ended up making it worth it, even for the kids. 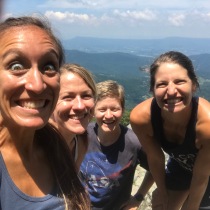 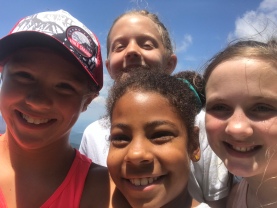 The cabin where we stayed was surrounded by beautiful farm land and an event space.  Both mornings, Alissa and I went out for a five mile run along the corn fields.  This morning as we were rounding the corner of one of the barns, we saw a guy sitting down taking a smoke break.  I tried to act like I didn’t see him because we weren’t sure if we should even be there, but apparently Alissa didn’t look away.  And she got an eye full of nekked lady!  We spent much of the rest of the run trying to figure out why she was there in the first place.  Were they the newlywed couple from the night before?  Limo driver and guest?  Owners?  Who knows.  Whoever they were, they certainly weren’t expecting us to come trotting around that corner in the middle of nowhere. 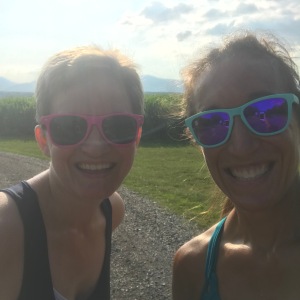 We were crazy hot when we got back, so jumping in the river in our shorts and sports bras seemed like the right thing to do.  Eventually everyone else joined us…until they saw a snake in the water!  Not being a 6 (look…I’ve learned something about the Enneagram!), I decided I wasn’t worried about it, and I stuck with my plan of swimming across the river and back while Rachel paddled along beside me.  The snakes stayed away.

I’m so incredibly thankful for this weekend that we had away.  No spreadsheets, no little people, no drama….it was perfect.  Here’s to conquering all the hard parts of middle school together.

When Jay and I were dating, we went camping in Florida over winter break.  Most of the details of that trip are gone from my memory, but I do remember one pretty clearly.  We had just finished a really yummy dinner and he asked me, “If we get married, can we keep going camping like this?”  Um….YES!  Six weeks later, he put a ring on it.  Fourteen years and two kids later, we still love camping together.

Friday we left for our trip to James River State Park.  For dinner that night we had chicken & veggies cooked in foil packs, the same meal that I’m pretty sure convinced Jay he was ready to start talking about marriage 14 years ago.

I’ve been counting down the years until Bubba would turn 6, the minimum age for tubing, canoeing, or kayaking at the park.  I ended up deciding to take the kids tubing Saturday morning because I remember enjoying that as a kid.  I just had a whole paragraph typed out about Bubba’s bad attitude during this trip, but I’ve decided I’m not going to let that define my memory.  Instead I’ll choose to remember the rapids that felt big from the water but look tiny from the bank, the magic of watching the bottom of the river zip by you in the shallow parts, and our stop on a sandy island to poke around.  Tubing was just as fun as I had remembered it.

I know Gerry Brooks would not approve of this photo, but I couldn’t help myself.   In the afternoon I took the kids to the Discover Area, a natural playground of sorts.  They played, and I prepared for my upcoming book club in the shade.  I love these slow moments.

Saturday night we took a wagon trip to the Tye River Overlook with a park ranger.  (Jay took this shot of us on the ride, and I happen to love it!)  The ranger had an electronic owl call to attract screech owls.  On our third or fourth stop, right about the point that Bubba fell asleep in my lap, we finally got one to respond!  It talked to us from a nearby tree for several minutes, but we never spotted it.  On our last stop we heard both the whinny and bounce calls, and two owls called back and forth to each other.  We joked that we had just helped to make an owl love connection.

This day started out the best way…with a run.  I took the Cabell trail, and in keeping with tradition, got slightly lost.  The trail map and markings are great at the park….about 95% of the time.  But when there’s an arrow pointing left and no real trail going left, you just have to make your best guess.

The night before, Bubba asked to join me on the morning run, but we all knew that would be fun for like the first 5 minutes.  So I promised him a short run together when I got back.  He turned out to be a much better running partner than expected.  We took the Cabell trail in the opposite direction from what I had just run and figured out where I went off course.  I’m still sticking with the fact that it was a signage error….not mine. 🙂

Later that morning we went to two programs led by the rangers.  We watched Cobb, the corn snake, eat his weekly meal of a tiny thawed out mouse, then both kids held him.  We also learned lots of interesting ways to start a fire, and Chica got to try it out with a magnifying glass.  When I asked the kids at lunch today what their three favorite parts of the weekend were, both of these were mentioned.  I was slightly underwhelmed, but they were enthralled.  Doesn’t it often work that way??

If I’m being honest, I feel like I have a hard time connecting with this one these days.  I’ve written about that a bit, but that feeling keeps nagging at me.  So when she expressed interest in kayaking, I jumped on the opportunity to spend some time just with her.  We rented two boats after lunch on Sunday, and it was everything I hoped it would be.  She was (is) brave and strong and chatty and positive and encouraging.  We docked our boats twice and explored.  At lunch today both of us voted kayaking as our favorite part of the trip.

As if we hadn’t already packed enough into this day, I ended up sending the kids on a scavenger hunt before dinner.  I hid some Dollar Tree toys around the campground with clues, and they rode their bikes to find them.  The hunt was followed by a few (mostly drama free) hours of playing together.

I was feeling brave this morning, so I decided on a morning bike ride instead of run.  I’m still so green at riding trails.  I picked the longest, easiest trail in the park, the River Trail.  Most of it was a really wide, grassy path, but the end had several super steep downhill sections.  I’ve been reading about taking risks in my math teacher book, and I know risks are how we learn.  So…..I leveled my pedals, stood up, stuck my elbows out and butt back, cried out “Jesus! Jesus!” a few times, and went for it.  I lived to tell about it, y’all.  It was kinda fun. 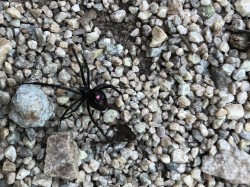 The rest of the day was just packing up and hot.  Real hot.  The most exciting thing that happened was that we found a black widow spider building an egg sac on the top of our tent, under the rain fly.  I snapped this picture and took a short video before Jay killed it.

And finally, a few more pictures just for fun!  I asked Jay to send me a few of his best photos from the weekend.  Apparently he either really likes funny face photos, or that’s all we ever do when he pulls out the camera. 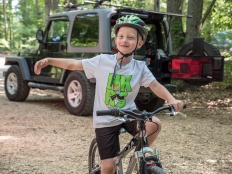 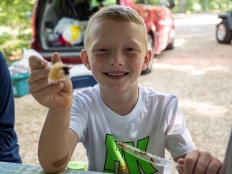