Eating:   Hot Tamales. Daddy took the hint and bought the big bag again. Just in time for me to (likely) receive 27 boxes from my students as end of the year gifts. Not too worry. One can never have too many. Other favorites these days include chicken tacos, clean-out-the-fridge pizza, and Mini Wheats. Not too exciting.

Reading:  I just finished Flora & Ulysses, and it was, “Holy Bagumba!” good. Thanks to my librarian friend, Ann, for the recommendation. I just started another recent Newberry Honor book called Paperboy. (Yes, my reading material of choice is meant for 10 year olds. I’m not ashamed.) I’m also looking forward to starting The Good and Beautiful God next week with our LifeGroup. I admit I was totally sold when I read that my “assignment” the first week was to sleep more. I’m all in.

Listening:  To the sound of the dryer and the dishwasher. And Jay reading me the day’s funniness from the Internets. There is peace in this time of the night.

Singing:  One of my students challenged me to write a song about equilateral, isosceles, and scalene triangles. I’m not singing it yet, but you can bet I will be by the end of the week. Our favorites right now in class are Mean, Median, Mode, & Range to the tune of Home on the Range, and the Perimeter, Area, Volume song to the tune of Oh the Lord’s Been Good to Me. And if you happen to catch me jammin’ in my car on the way to or from work, it’s probably Beautiful Day or Oceans.

Watching:  Sam and Nia. I can’t really tell you what I like about these people. All I know is that watching them makes folding laundry or loading the dishwasher a little easier. 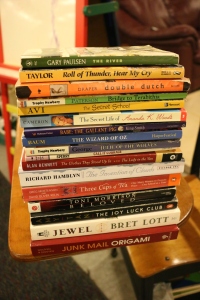 Playing:  Fishbowl. I learned it a few weeks ago at our grown-up game night, then I tried it with my fourth graders and their vocabulary words. Seriously…where was this game when I was a camp counselor??

Hoping:  For lots of time to read this summer. Last week I came home from a yard sale with this stack of books for just $1.

Learning:  How much I love gardening. This weekend we discovered healthy pumpkin plants growing up under the porch where we stashed our discarded Halloween pumpkins. Tonight I replanted three overgrown seedlings from my classroom into my garden at home. We also spotted our first tiny Roma tomato and a big honkin’ bloom on our squash plants. And those cool spiky plants I wrote about here? They are in full bloom and absolutely beautiful. Turns out they are Asiatic lilies. Totally worth the wait.

I’d love to hear what’s happening currently with you.  Leave me a comment and let me know!

I believe I’ve hit a new high in the adventures of parenthood.  I’m camped out in the hallway, drinking a glass of wine, eating ice cream, and listening to someone else put Bubba to bed:

Yep.  She’s been asking for a few days to try to put him to bed one night.  Each evening I have had some reason why it was a bad idea (he’s too grumpy, it’s too late, Mommy’s too grumpy, etc.), but tonight I could think of none.  So I gave her a few basic instructions: get him in bed, read him 3 or 4 books, say a prayer, turn the light out, and sit next to him until he’s asleep.  Then creep out of the room, and you’re done!  Oh, and if it doesn’t work, don’t get upset, just come get me.  Half of the time it doesn’t even work for Mommy.

The first five minutes was brutal as he wailed over and over, asking for me.  I was sure she hadn’t bargained for the screaming and that she was going to throw in the towel after a minute or two.  But much to my surprise, she stuck it out.  And gradually I could hear less of his protests and more of her reading.

The sound of her working her way slowly through familiar books and the image I had of him sitting on the bed, waiting patiently for her to figure out the tough parts was just too perfect.  So though the dishes need to be done and the laundry needs to be folded, here I sit, listening and waiting:

Are you having fun, Bubba?  Ok, I’ll keep reading to you.

Don’t worry, Bubba.  I’m just going over here to get some more books.

At roughly the 30 minute mark, she crept out of the room with the most surprised look on her face.  “I did it!  He’s asleep!”  I celebrated with her, and then sent her downstairs to tell Daddy.  She hadn’t made it past the first three steps before the wailing kicked back in.  But this time he was calling her name.  Be still, little heart.

So, as we often do, she went in for round two, rereading each of the books, this time with more confidence.  Soon she was out again, and this time he was really down for the count.  “It was like magic!” she exclaimed.  Yes, Chica, you are magic.

After we had read her two stories and said our own prayers (“God, thank you for letting me get Bubba to sleep so good.”), she asked me an interesting question.  She asked me if I was more proud of her brave jump off the diving board today or of her putting Bubba to sleep.  It was a tough call, but I went with bedtime.  I told her that I thought she was very determined and that I could tell that she really loved Bubba.

And finally (because I have no other ideas for ending this post??), I leave you with a limerick:

There was a young girl who read
Three books to get Brother to bed
She turned out the light
And called it a night
“You’re hired forever!” Mom said.

There are just some moments as a parent when you have absolutely no idea what to do. You just stare at your kid, mouth gaping, thinking, “Who the heck thought I was prepared to handle this?” This week that moment happened exactly 2.4 seconds after Chica figured out her pebble wasn’t actually magic.

At some point during the beginning of the week, we began hearing about a magic pebble that Chica was making and/or pretending in her class. At four there is such a confusing blur between reality and pretend, so I’ve learned not to ask too many of those kinds of questions. Just go with it.

Much of our conversation driving home that day centered around brainstorming our best ideas for wishes when she had the magic pebble ready. She didn’t have to think too hard to determine her top two choices: #1 For it to automatically be her birthday. #2 For a real Rainbow Dash. I’ve never actually watched an episode of My Little Ponies, but I’ve heard her talk about it enough to know that this must be the main character. When she asked me what my wish with the magic pebble would be, I hesitated for a moment. Before I could get out an answer, she offered, “I know, Mom. You’d wish to get all your work done.” Exactly, Chica. Exactly.

We didn’t hear anything else about the magic pebble until dinner later. Unprompted, she begins a captivating retelling of the book her class has read, Sylvester and the Magic Pebble. I know I am biased, but she is truly a good storyteller! I’m sure I have read or heard this story multiple times….actually, I think I may have even acted it out before….but she had me on the edge of my seat as Mr. and Mrs. Donkey finished their picnic on Sylvester the Rock. Jay, Bubba, and I all cheered when Sylvester had the surprise reunion with his parents.

Well yesterday Chica came prancing up to my classroom after school just dying to show me her magic pebble. It was about the size of a peanut shell and coated in a healthy layer of gold and red glitter. As if any clarification was needed, the Ziplock bag that held it was definitively labeled with her name and “Magic Pebble.”

She let me touch it, showed it off to a few of my students that were waiting for the bus, and then got busy with her wishing. I got busy with e-mails or planning or whatever it is that I do every day after school, and I forgot all about the magic pebble. Until…

Until she came back to me, still clutching the pebble that now had a few glitterless spots showing through. “It doesn’t work,” she choked out before bursting into tears…big, fast tears. “I wished (sob) for Rainbow Dash (sob), and the magic pebble (sob) didn’t work (sob).”

So that’s the moment. The moment where I have no idea. I can’t very well say, “Oh, Chica, your teacher was just playing with you….you know it’s not really a magic pebble.” That’s the magical thing about being four…you still believe every-last-thing your teacher tells you. No need to rush out of that. So my next thought is to tell her to keep on wishin’, but I quickly realize that I’m only setting myself up for even louder sobs and faster tears later. So I do the only thing a deer-in-the-headlights momma knows to do…hold her, let her cry, and keep thinking.

That’s when I thought of Bridge to Terabithia. I wish I could say I have read the book, but I’ll admit I’ve just seen the movie. Which was great, by the way….only movie during which I’ve stayed awake until the end in a loooong time. Anyway, I told her about that movie and how the kids in it pretended they had this whole other world to visit. After awhile, they got so good at pretending, that it actually seemed real. “So why don’t you pretend that your wishes came true, and after a while, maybe it will seem real.”

Yeah, so, that’s good in movies and all, but it didn’t work for Chica the Puddle. I totally thought she would buy it. So wrong.

So after a few more tears, she just got mad, decided to put it back in its Ziplock bag, hide it somewhere where she didn’t have to look at it, and move on to Wild Kratts (yeah, I don’t get this show yet, either). I let out a sigh of relief, got back to e-mails, and forgot about it too. Phew.

Today as I cleaned up my computer counter, I snagged the pebble and stashed it in my lunchbox. I’m not quite sure what to do with it yet, but you can bet it’s not going to appear for her to find anytime soon.

I guess maybe I should hold on to it just in case I ever find myself transformed into a rock trying to get away from a lion. You never know.