“This. This is why I write. Because even a half-written, well-intended dispatch from a southpoint in time is better than a vague, distant memory evaporating into the Heavens.” Charlie Capen

I have a confession to make. Actually, I have about ten to make from this day, but let’s start at the beginning:

I was more nervous about Day One of soccer camp than she was.

I had checked and rechecked the list of things we were supposed to bring.  I lathered on the sunscreen extra thick.  We completed at least three pep talks about not giving up and being a good sport.  Who knew I would be the one needing the real pep talk?

I’m still not sure what I was so fearful of.  I guess mostly that she would do her melting routine the second that she missed a ball or even felt like she might miss a ball.  I so want her to be tough.  Resilient.  Determined.  Persistent.  But she’s just not there yet.  She’s sensitive and tentative (and also stubborn!) and needs someone over and over to help her pick up the puddle and remind her, push her, to keep going.

So Bubba and I sat on the sidelines and chatted it up with one of those moms that makes it look easy.  After a few minutes, Chica ran off to join her coach, carrying her soccer ball (yeah…she’s real new).  Deciding it was now or never, Bubba and I made our exit.  And as we drove to our “something-fun-to-do-while-sister-is-at-soccer-camp” destination, I apologized to all of those mommies that I had judged:

To the mom who had to walk her kid up to the cabin on summer camp drop off day when she was supposed to say goodbye at the bottom of the hill, I’m sorry.  I get it now.

To the mom who came to class to help her (big) kid unpack on his first day in a new school, I’m sorry.  I get it now.

To the mom who’s afraid to leave her kid in the nursery with a sea full of faces she doesn’t know, I’m sorry.  I get it now.

I think each of those mommies just needed her own pep talk too:  You’ve done your very best to prepare her for whatever lies ahead.  And when she screws up, the adults around her will remember that she is, in fact, only 6 (or 2, or 10, or however old).  They won’t be thinking about you, Mom.  They’ll be thinking about how to get her back on track, and it will happen.  And she’ll remember to go to the bathroom, and she’ll make a friend or three, and she’ll. be. fine.

So she was fine. 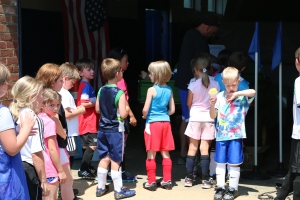 And the report I got from her is that soccer camp was “fun” and she did “pretty good” in in the not giving up department.  Turns out, as best as I could gather from her, that this means she sat out a few times because she was afraid of losing, but there were no tears involved.  Over lunch I was working hard to convince myself that this, in fact, was a victory, when she came out of nowhere to tell me that she shared her snack with a friend who didn’t like what his mom had packed.

Thank you, Chica, for reminding me that being tough and resilient and determined and persistent isn’t the only goal.  I admire your generous heart.

So I began by saying that I had about ten more confessions to make from this day.  I’m out of time for details, but here are the other nine:

2.  I asked Jay if swimming in the pool could count as a bath for the kids.  He said no.  I’m still going with yes.
3.  I ate more Hot Tamales today that I care to count, each time digging into the bag stashed in the cabinet hoping that the kids wouldn’t notice.  I think I have a problem.
4.  I’m trying hard to limit the amount of time my kids spend in front of a screen, but I don’t follow those same rules myself.  Not cool.
5.  I got all kinds of aggravated at Chica because she continues to show no interest in learning how to swim for real.  Scary Mommy made an appearance at the YMCA this afternoon.
6.  This afternoon I worked on sorting and throwing out kindergarten papers that came home on the last day of school.  I’ve learned the hard way to burry this kind of thing in the trashcan several layers deep.  (This one is barely a confession…doesn’t every mom do this??)
7.  Bubba was more fun this morning without Chica.
8.  I bribed Chica to do housework with Hot Tamales.  I’m not sure if I mentioned this part to Jay when he thanked me for all the work I got done today….
9.  I bought Bubba a pair of shoes even though he said they didn’t fit right.  I’m over it.  After trying on 15 pairs with no luck, I finally decided he didn’t know what he was talking about.
10.  Err….I actually can’t think of a tenth.  But ten sounded better than nine, so I left it.  I lied. Sorry.