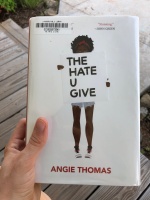 Nana and Papa took the kids for the day, so I had great intentions of being super productive on my kid-free day.  I know you’re surprised but….that didn’t exactly happen.  I did catch up on emails, clean up a bit, and do some planning for next week, but mostly I spent the day finishing up this book, The Hate U Give. I picked it up from the library thanks to the Facebook recommendation of a camp friend.  I’m still trying to figure out what to say about it.  Saying “I love it” just doesn’t feel quite right for a book that’s all about police brutality.  To borrow my friend’s words, it rocked my world.  I was struck by how the main character struggled to fit in and be herself, both in her own neighborhood and in her almost all white school.  I can’t help but wonder if this is the reality of some of our students, especially Chica’s classmates.  I was also struck by how the author was able to describe the real, personal, raw experience of people who are victims or witnesses of police violence.  These real life events become so politicized so fast in the media.  We forget….I forget….that behind them are real people with stories so much deeper than we will ever know.  This is the kind of book that changes you.

After a downtown run and my first trip to the Community Market this summer, we headed to Roanoke for the Roanoke Non-Ultra Trail Series (RNUTS) picnic.  The food was good, the company was great, and we finally got our sweet jackets.  I’m not embarrassed to admit that the purple jacket is what pushed me over the edge to sign up for the series.  Now we just have to wait for an appropriate time to wear them…

*Update:  Monday was rainy and uncharacteristically cold for June, and I was thrilled. 🙂 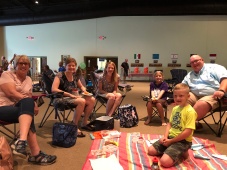 What’s better than a picnic in the park?  A picnic inside!  There’s no worry of kids wandering off too far, no need for sunscreen, way less sweating….it’s pretty great.  That’s what we did this morning at church!  Here’s my crew enjoying lunch, including Nana and Emily.  My favorite parts of the morning were playing games with Bubba in the gym and watching Chica ham it up on stage as Gideon’s servant.

I tweeted today’s other memory about Pokemon and talking math with Bubba here.   #goodbookchoiceafterall 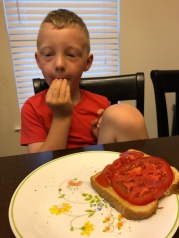 So today is a perfect example of why I am trying to post a memory from each summer day.  I have no trips, no play dates, and no funny stories to post.  In the morning I led a STEM class at an LC summer camp.  The kids spent the afternoon and evening with Nana, and I tried to get work done while they were gone.  I cooked rainbow chard to go with our chicken dinner, and Jay pretty much hated it.  It was just a regular ol’ day, and this is my only photo to show for it.

But the tomatoes.  Can we just talk about summer tomatoes for a moment?  I got these huge, ripe ones from the first lady on the right at the market, and I’m embarrassed to tell you just how much I paid for them.  But it was WORTH. IT.  Toast the bread, butter it, put on the big honkin’ slices, top with salt and pepper, and enjoy summer on a plate.  All the people in my house ask for more, and I couldn’t be happier.

This has become a common thread this week, but Nana kept the kids again this morning so things would be a bit easier at my STEM class.  Bubba joined me in the afternoon for some errands, and he complained of an upset stomach the whole time.  He refused to eat dinner and fell fast asleep in Jay’s lap when the rest of us were done eating.

About 20 minutes later, Bubba started to rouse.  He took one confused look around and promptly puked right in Jay’s lap.  Twice.  Thankfully I caught the third time in a trashcan.  The look on Jay’s face was one of pure horror.  I was so sure Jay was going to puke in response, right on top of Bubba, but he held it together miraculously.

There are several circumstances in our house where I play the Mom Card….certain things I declare I won’t do or put up with, just because I’m the mom:  I won’t let sweaty Bubba put his sweaty head on me when it’s hot outside.  I don’t do feet.  Everyone’s been thoroughly warned that tickling and Wet Willies are a sure way to pull back a nub.  Well, Jay pretty much plays the Dad Card on puke, so I had the pleasure of cleaning everything up.  I snapped this picture after all the excitement had died down.  Poor guy.

It feels like I’m always saying no during the school year.  No, I can’t do a Sunday afternoon run.  No, I can’t make game night.  No, work, school, the house is a mess, blah, blah, blah.  But this picture reminds me that there are way more chances to say yes in the summer.  Rachel posted that she was going for an after dinner walk, and thankfully, I could join her!  We talked about book clubs, school stuff, trips, being young with bodies that are starting to feel old, and everything in between.  Note the big ol’ ice pack on her booty and the fact that I still can’t figure out the posing thing despite her many lessons.  Whatevs.

Go Noodle is the break of choice at our LC camp this week.  Today we watched Pop See Ko, a favorite for nearly everyone.  We had to go by school afterwards to drop some things off, and they were still singing Pop See Ko when we got there.  I was feeling grumpy as ever at this particular moment, but them getting along and enjoying each other helped to pull me out of my funk a bit.  Bubba’s move was to jump and cross both his arms and legs.

Also, tonight the kids made pancakes with no help AND packed their own stuff for camping.  That’s a Double Parent Level Up right there.